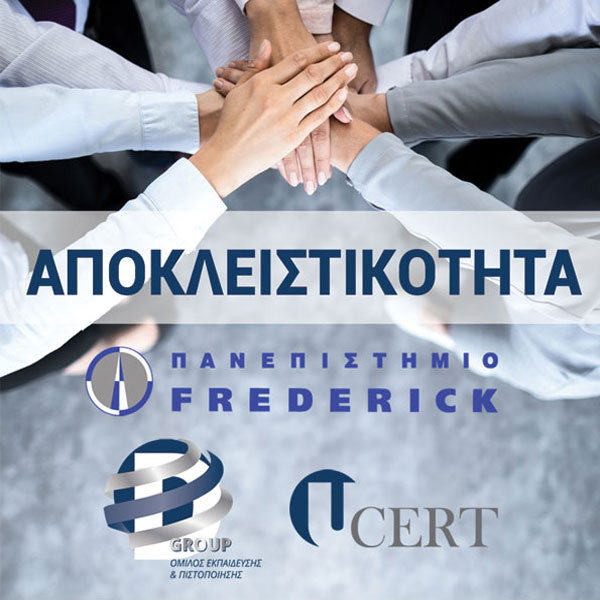 UCERT, as a Human Resources Certification Body recognized by E.O.P.P.E.P. (decision No. 416/31-07-2020 by the management board of E.O.P.P.E.P.) has expanded its operations abroad, by establishing collaborations with institutions of other countries, like Frederick private University of Cyprus.

Frederick University is a private institution that operates in the Democracy of Cyprus, a country member of the European Union. It began its operation in September 2007 after the decision of the Council of Ministers of the Democracy of Cyprus, following many years of successful operation in the education and research sector as Frederick Institute of Technology. In January 2012, the University took the final seal of approval for its operation from the Council of Ministers.

Frederick University’s mission is to provide opportunities for learning, through teaching and research in the sectors of science, technology, letters and arts, as well as contributing to the wellbeing of the public. Frederick University’s educational programs are of the highest standards and provide their graduates with recognized qualifications, to ensure their academic and professional success, mobility and competitiveness, both in Cyprus and abroad. Frederick University cultivates, transmits and applies the multidisciplinary exchange of knowledge.

Frederick University offers five different majors, that cover all the different educational aspects and offers Undergraduate, Postgraduate and PhD programs. The headquarters are located in Nicosia, the capital of Cyprus, while some departments also operate in the branch of the University in Limassol. The official languages of the University are Greek and English.